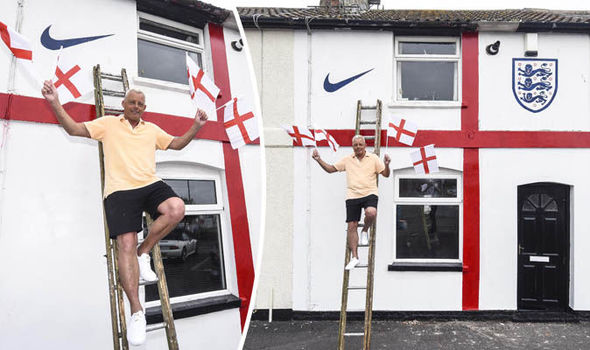 The two-bedroom house in Fleetwood, Lancashire is even decorated with a Nike ‘swoosh’ in the upper left corner and the Three Lions emblem on the right as a tribute to the current English kit.

“Football has always been an important part of my life. I support my country and I am a loyal fan of England.

â€œI painted it to be the home of England, and it just stuck.

â€œNow, all over Fleetwood, people know my house as the home of England and it’s a bit of a landmark in the city.

“If I ever need to order a cab, I just tell the driver that I live in the England house and they know right away where I mean.”

Mr Hughes first painted his house with the Cross of St. George 20 years ago, when his son Tomas, now 26, started playing football at the age of seven.

The former pro, who played for Walsall, Wolverhampton and Fleetwood Town before injury interrupted his career, wanted a unique design to impress his son’s football mates.

But Mr Hughes says he was forced to repaint the stone property in white eight years ago after a dispute with neighboring businesses in 2008, but restored it to patriotic glory for the World Cup in 2010.

Since then the design has stuck and he now touches up the paintwork before each international tournament to keep it in pristine condition.

But Mr Hughes admitted that his house stands out across the street, as the other fisherman’s cottages are painted in muted pastel shades.

And he said the building was a local landmark and a popular selfie destination for residents of Fleetwood and the young players he has coached with the local Wyre FC team for the past 15 years.

Liverpool fan Mr Hughes said: “Eight years ago I had to paint on it because apparently it offended people.

“Since then, I have repainted it for all the World Cups and the Euros.

â€œI never had a complaint from anyone before this, and I haven’t had any since.

â€œEveryone seems to love it and people always want photos and selfies in front of the house.

â€œAbsolutely everyone who sees it stops to take a picture.

â€œWe are near an Asda supermarket, and people are crossing to have their pictures taken after shopping.

“We should be more proud of the cross of Saint George and more patriots in piloting it.

â€œWe are the only country in the world where you can offend by flying your own flag.

“I am English so I will hoist an English flag and I will continue to do so.”

The football fan is ready for the Euro

Optimistic, Mr Hughes believes England will advance to the semi-finals of this year’s tournament, although he remains hopeful for a potential victory.

He said: “I think England will advance to the semi-finals this year.

â€œI hope we win it to be honest, because I’m so dumb.

“But I would be happy with the semi-finals.

â€œEveryone who walks past the house says they love it so much, so we have to do something right.

“It makes people smile and it’s a lot of fun and that’s what it is about.”