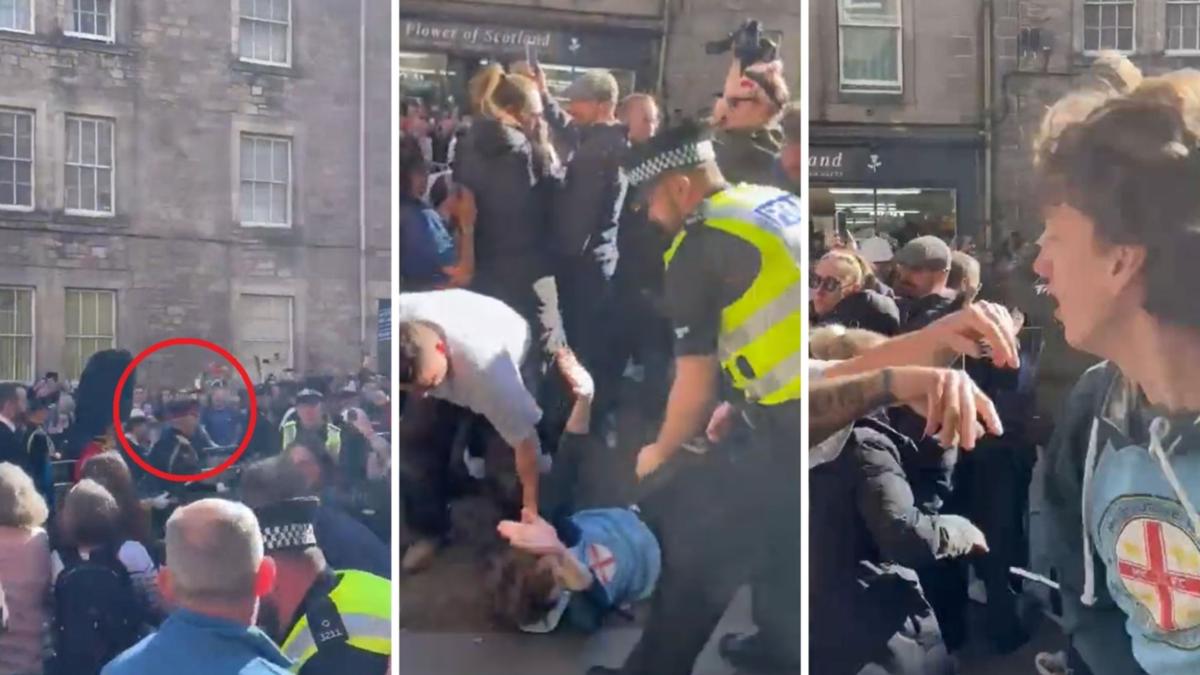 A man wearing an Australian rules football shirt was dragged and arrested after heckling Prince Andrew as he walked behind his late mother’s coffin during the procession in Edinburgh on Monday.

The heckler, dressed in a Melbourne City FC jersey and perched at the very front of the crowd, repeatedly shouted “Andrew, you are a sick old man”, before being arrested by the police.

The crowd was silent as the late Queen’s coffin passed, until the man’s words echoed loudly through the procession.

Video shows members of the public appearing to push the man to the ground before he was pulled away by police.

‘Disgusting,’ the man shouted as police led him away from the crowd

“Oi, I did nothing wrong,” he hears the police say.

The rowdy known as Rory, according to Scotland’s Holyrood Daily, later told the local paper: ‘Powerful men shouldn’t be able to commit sex crimes and get away with it.’

He said a spokesman for Police Scotland confirmed that “a 22-year-old man was arrested in connection with a breach of the peace on the Royal Mile at around 2.50pm on Monday 12th September 2022”.

The sled appeared to refer to the allegation by Virginia Roberts Giuffre, victim of convicted sex offender Jeffrey Epstein, that she was forced to perform sexual acts with Andrew when she was underage.

The royal denied the allegations, saying a photo of the two together was fake.

Prince Andrew settled a sex abuse lawsuit in the United States earlier this year after a case was brought against him by Giuffre.

As the Queen’s coffin procession got underway on Monday, Prince Andrew was followed in morning costume while his siblings King Charles III, Princess Anne and Prince Edward wore military uniforms.

Andrew has been stripped of his right to wear military uniform over the scandal, but will be granted an exception for the final vigil as a “special mark of respect” – the same exception not given to Prince Harry.

The heckler was the second person to be arrested for breaching the peace. A 22-year-old woman has reportedly been accused of holding up an anti-monarchy sign in front of Saint-Gilles Cathedral.