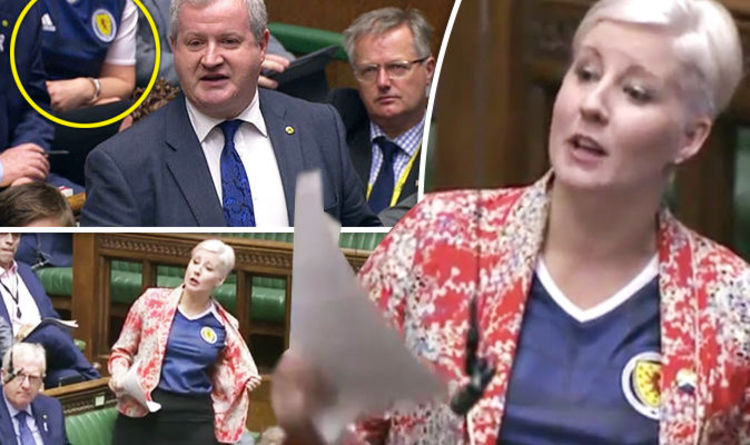 Hannah Bardell said she donned the navy blue jersey to support the women’s team ahead of Euro 2017’s clash with England tonight. But she has been criticized for flouting an unofficial dress code with her choice of “unparliamentary” attire.

It comes after House of Commons Speaker John Bercow ruled that male MPs do not need to wear neckties in the chamber, ending more than a century of convention.

Wishing the team best wishes, Ms Bardell told MPs that she played with two of her team members in college.

She joked: “Their careers have clearly been more successful in football than mine.”

The former journalist and television producer had previously attended a charity sporting event outside Westminster.

Later, as MPs thronged the Chamber for the weekly Prime Minister’s Questions, Ms Bardell was seen upstairs without a blazer.

While parliamentary rules state that there is “no exact dress code”, MPs must “show respect for the House and for its central position in the life of the nation”.

They add: â€œThe conspicuous display of badges, brand names, slogans or other forms of advertising for commercial or non-commercial purposes is out of order.

Those who show a “flagrant disrespect in the way they dress” may be asked to leave.

Ms Champion added: “I think there will be a calm word.”

Kirstene Hair, Scottish Conservative MP for Angus, said: “Ms Bardell has suggested her football career has failed – no more embarrassing stunts like today and she runs the risk of her political career following suit.

“The SNP and Ms. Bardell need to take a step back and realize that they don’t have the saltire.”

Ms Bardell’s choice of shirt also sparked a social media storm amid claims that her “shameful dress” was a form of “attention seeking”.

Criticizing the SNP, a Twitter user called Tommy McG wrote: â€œThey would be the first to hit the roof if an Englishman wore an English top. “

But others have described her as “heroine” and “legend” to “raise the profile of women’s sport”.

Why automatic title loans are a bad idea