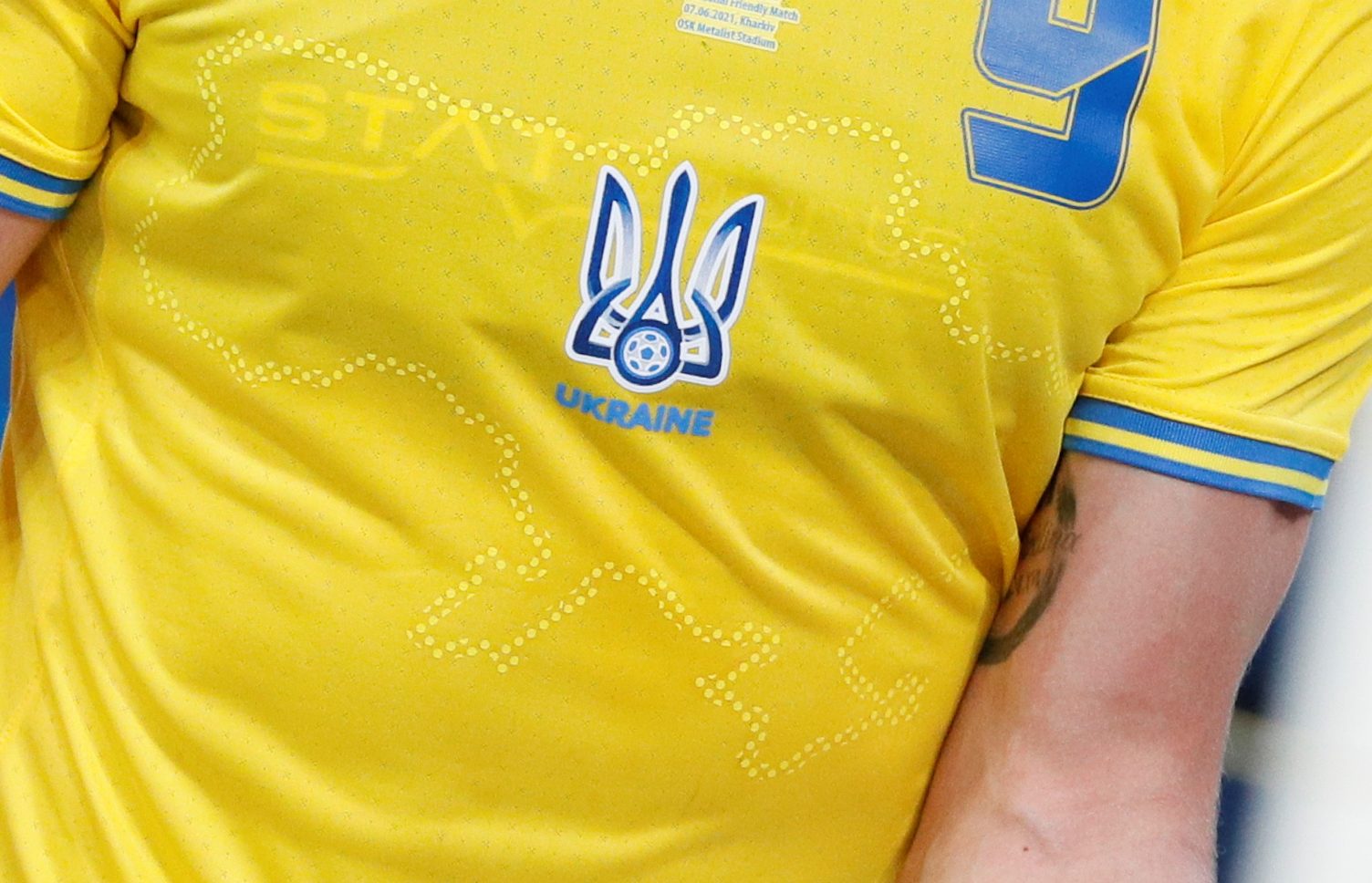 The new Ukrainian national team jersey with a map of Ukraine including Crimea pictured during an international friendly against Cyprus in Kharkiv on June 7, 2021. (REUTERS / Gleb Garanich)

Russia expressed outrage over the new jersey for the Ukrainian national football team, which features a prominent blank map of Ukraine. The Kremlin’s anger centers on the inclusion of Crimea. The peninsula is internationally recognized as part of Ukraine but has been under Russian occupation since 2014.

The new soccer jersey was unveiled on June 6 by the president of the Ukrainian Football Association Andriy Pavelko. “We believe that the silhouette of Ukraine will give strength to the players, as they will fight for the whole of Ukraine,” Pavelko commented on Facebook. â€œAll of Ukraine, from Sevastopol and Simferopol to Kiev, and from Donetsk and Luhansk to Uzhhorod, will support them. Notably, four of the six cities mentioned in Pavelko’s message (Sevastopol, Simferopol, Donetsk and Luhansk) are currently under Russian occupation.

As might be expected, Ukraine’s new soccer jersey caused a wave of outrage in Moscow and quickly became one of the headlines in Russia’s Kremlin-controlled mainstream media. spokesperson for the Russian Foreign Ministry Maria zakharova accused Kiev of “reuniting the territory of Ukraine with Russian Crimea” and claimed that the design of the new jersey “created the illusion of the impossible”. Meanwhile, Russian MP Dmitry Svishchev marked the design of the shirt “a political provocation“and argued that it was illegal to show a map of Ukraine” which includes Russian territory “.

Russian calls for legality are unlikely to convince the international public, especially in the context of Crimea. The Kremlin took control of the Ukrainian Crimean Peninsula in the spring of 2014 using troops without identifying badges who were later confirmed as Russian military. Russian President Vladimir Putin initially denied any involvement in the takeover, but finally admitted to having personally ordered the whole operation.

While Russia continues to control Crimea, Moscow has been unable to gain international recognition for its claims to the peninsula. More than seven years after Putin triumphantly declared Crimea’s “reunion” with the Russian Federation, it remains under sanctions and is largely cut off from the outside world.

UkraineAlert is a comprehensive online publication that regularly provides information and analysis on the development of politics, economy, civil society and culture in Ukraine.

The geopolitical scandal over Ukraine’s new shirts threatens to hamper preparations for the delayed Euro 2020 football championship, which will begin later this week after the postponement linked to last year’s pandemic.

At this point, Ukraine looks poised for a symbolic victory over its giant neighbor. Despite Russian objections to the design of the shirt, officials from European football’s governing body, UEFA, confirmed in a June 7 statement that the Ukrainian jersey has received official approval for use in the championship.

This is not the first time that the undeclared seven-year war between Russia and Ukraine has spilled over onto the international stage. The two countries clashed in a memorable way at the 2016 Eurovision Song Contest, with Ukraine eventually edging Russia to victory thanks to a bewitching ballad by Ukrainian diva Jamala who told the story of the Soviet deportation of the Crimean Tatars in 1944.

Two years later, during the 2018 FIFA World Cup in Russia, members of the Croatian team made international headlines by posting a video featuring patriotic Ukrainian slogans as they celebrated the elimination of the host country, Russia, of the competition.

The map depicting Crimea was not the only design element of the new Ukrainian soccer jersey that ruffled the Kremlin’s feathers. Foreign Ministry spokeswoman Zakharova also opposed the inclusion of Ukraine’s official military greetings, â€œGlory to Ukraine! and “Glory to the heroes!”, which she called copies of Nazi German slogans, while emphasizing their links with Ukrainian nationalist organizations of WWII.

Claims of this nature are not new and have traditionally played a key role in the Kremlin’s efforts to discredit Ukraine’s national liberation movement by associating it with Nazi collaboration. In fact, the modern struggle for an independent Ukraine predates the totalitarian era by over a hundred years and has its roots in the first half of the 19th century.

The origins of “Glory to Ukraine!” chorus can also be traced back to this period. It had already emerged as a popular slogan among Ukrainian patriots when Ukraine’s candidacy for statehood failed in the early 20th century, decades before the outbreak of World War II.

In recent years, â€œGlory to Ukraine! Was used as a popular rallying cry during the 2013-14 Euromaidan revolution in Ukraine. He gained unprecedented popularity among protesters as millions took to the streets of Kiev and other Ukrainian cities to prevent the country from sliding into Kremlin-style authoritarianism.

In 2018, the slogan gained official status when it was adopted as the standard greeting of the Ukrainian armed forces. It is now commonly used by Ukrainian officials, including President Volodymyr Zelenskyy, as well as by vdignitaries and heads of state like Turkish President Recep Tayyip Erdogan.

None of this convinced Russia to abandon its campaign of disinformation on the origins and contemporary context of “Glory to Ukraine!” slogan. Indeed, Moscow has in fact doubled in recent years, stubbornly clinging to its portrayal of Ukraine as a hotbed of Nazism despite the massive rejection of nationalist political parties in every Ukrainian presidential and parliamentary election since 2014. Even the landslide victory Russian-speakers Jewish presidential candidate Volodymyr Zelenskyy in 2019 failed to shake Moscow’s resolve.

This is perhaps less surprising than it seems at first glance. As a revisionist power seeking to overturn the 1991 verdict, the Putin regime had good reason to rekindle Soviet-era propaganda accounts of “fascist Ukraine” as a means to justify further Russian aggression and to demonize Ukrainian national identity. Dating from the early years of the Cold War, this distorted view of Ukraine continues to resonate in the post-Soviet world, where the USSR’s staggering losses during WWII mean that the fight against Hitler remains a particularly moving subject. .

From a Ukrainian perspective, demystifying such distortions is a national security priority. Ukraine’s low profile and relative obscurity over the past seven years has made the country highly vulnerable to the strategies of disinformation that are at the heart of Putin’s hybrid warfare doctrine. However, the tide could gradually turn. The militarization of the Euro 2020 national football team jerseys is an indication that Ukraine is learning to defend itself and is able to do so with increasing confidence and creativity.

Peter Dickinson is editor-in-chief of the UkraineAlert service at the Atlantic Council.

The only way to deter Putin is to arm Ukraine

Vladimir Putin continues to threaten Ukraine with troop build-ups in the border region and the threat of a major escalation in the seven-year war between the two countries. The best way for the West to deter Russia is to arm Ukraine.

The opinions expressed in UkraineAlert are solely those of the authors and do not necessarily reflect the views of the Atlantic Council, its staff or its supporters.

UkraineAlert is a comprehensive online publication that regularly provides information and analysis on the development of politics, economy, civil society and culture in Ukraine.

The Eurasia Center mission is to strengthen transatlantic cooperation by promoting stability, democratic values â€‹â€‹and prosperity in Eurasia, from Eastern Europe and Turkey in the West to the Caucasus, Russia and Central Asia to ballast.